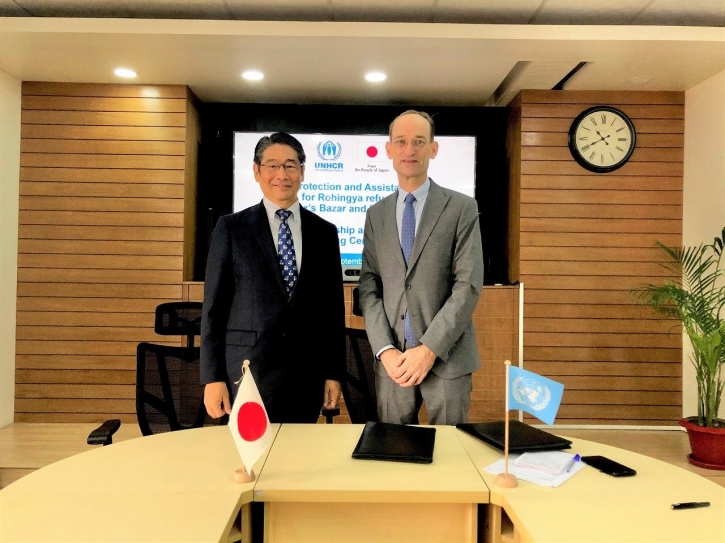 Japan has decided to disburse 3.5 million US dollars to UNHCR, the UN Refugee Agency, to provide protection and humanitarian assistance to Rohingyas those were forcefully displaced from Myanmar to Bangladesh.

The Japanese government and the UNHCR have signed an agreement regarding the assistance that would be used to maintain access to critical and life-sustaining services for Rohingyas living in the Cox's Bazar and Bhasan Char camps, said a press release issued by Japanese embassy in Dhaka on Wednesday.

As per the agreement, UNHCR will continue its humanitarian response in the camps in Cox's Bazar and on Bhasan Char, focusing on providing key services, such as legal and community-based protection, access to health, hygiene and sanitation, nutrition support and core relief items, reports BSS.

"Japan decided to provide assistance to this project, with the strong hope that it will improve the protection, healthcare and livelihood opportunities of the Rohingya population on Bhasan Char, and enhance their security in Cox's Bazar," said Japan Ambassador to Bangladesh ITO Naoki.

The envoy said as the Rohingya crisis has turned into the sixth year, it is imperative to continue funding for better and dignified lives of refugees, while making every effort for the early repatriation to Myanmar.

"With the view that durable solutions of this crisis will be conducive to realizing a Free and Open Indo-Pacific region, Japan will stand by the Government and the people of Bangladesh in supporting the Rohingya response." said Naoki.

UNHCR Representative in Bangladesh Johannes Van Der Klaauw said Japan was the first to support the humanitarian response on Bhasan Char while the contribution has allowed UNHCR to strengthen local NGO work on the island, including providing protection and access to essential services."

The support from Japan comes at a crucial moment, as the Rohingya response is one of the underfunded refugee situations in the world.

Since the beginning of the emergency in August 2017, Japan has been a steadfast supporter of the Rohingya response in Bangladesh, contributing over USD $170 million to UNHCR and other UN agencies and NGOs in Bangladesh, through this new funding, said the release.