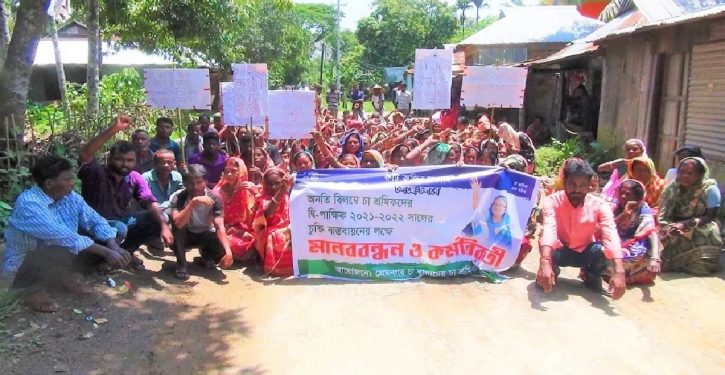 The workers of 167 tea gardens across the country, including 92 of Moulvibazar, continued their strike on Wednesday demanding an increase in their daily wages to Tk 300 from Tk120.

Bijoy Hazra, organising secretary of Bangladesh Tea Workers Union, said the movement will continue until their demand is met.

However, they will not put barricade on highways until August 23 considering the month of mourning. Programmes like human chain, protest meeting and procession will continue inside the gardens.

Besides, a tripartite meeting will be held in Dhaka on August 23 led by the Labour and Employment Minister and the secretary.

On Tuesday, a second round of meeting was held at Srimangal between the protesting workers’ leaders and Labour Division to end the strike. Labour Department Director General Khaled Mamun Chowdhury and labour leaders were present in the meeting.

According to the decision of the previous meeting, the tea garden owners side and the Bangladesh Tea Workers Union will hold another discussion at the Dhaka office of the Labour Department on Wednesday afternoon.

Workers demanded an increase to Tk300 a day, with inflation rising and the currency depreciating and they started a full-scale strike on Saturday, after four days of two-hour work abstention.

Bangladesh is producing a record amount of tea every year through the toil of the tea workers. In 2021, a record 96 million kilograms of tea was produced in the country thanks to the hard labour of the underpaid tea workers.

Although two agreements on increasing wages were signed, the fate of more than 1.5 lakh tea workers in the country hasn’t changed a bit.