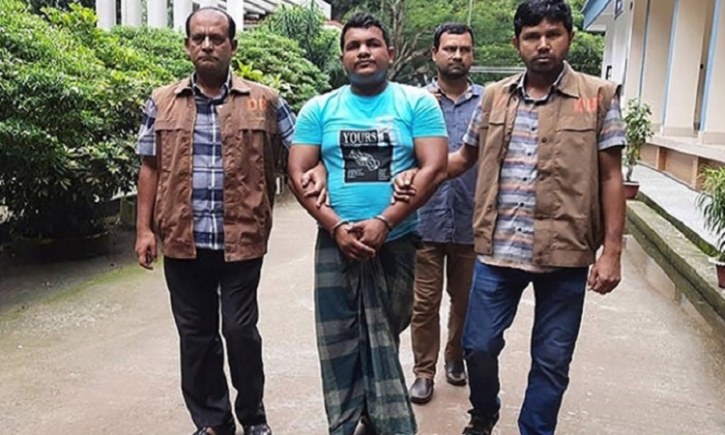 Detectives claimed to have arrested the main culprit on a charge of robbing commuters and raping a woman in a Chattogram-bound moving bus in a drive at New Bus Stand of Tangail early on Thursday.

The arrestee Raja Mia, hailing from Balla Village under Kalihati upazila of Tangail, has been living in a rented house in the new bus stand area for long, according to police.

Acting on a tip-off, a team of Detective Branch (DB) of Police carried out a raid in the area early Thursday and arrested him.

The intelligence team also recovered three mobile phone sets from the possession of Raja Mia, Sarkar Md Kaisar, superintendent of police in Tangail, confirmed it to the media.

In the early hours of Wednesday, seven armed men posing as passengers allegedly hijacked the Chattogram-bound bus in Tangail and robbed the commuters’ cash and other belongings

They also raped a 25-year-old woman in the bus at gunpoint during crime that occurred in Raktipara area of Tangail’s Madhupur upazila off the Dhaka-Tangail Highway.

Tangail police super Kaisar, said the bus of ‘Eagle Paribahan’, with 24 passengers on board, was on its way to Chattogram from Kushtia late on Tuesday night when the crime occurred.

Three of the seven robbers boarded the bus around 11 pm on Tuesday after it resumed its journey following a stopover at a hotel in Sirajganj district.

And some 5 to 10 minutes later, four more got into the bus, police said.

“Around 12 am on Wednesday when the bus took the busy Dhaka-Tangail Highway in the Natiapara area, the robbers whiffed out guns, hijacked the vehicle and forced the driver to drive towards Madhupur upazila,” the SP said.

The armed gang robbed the commuters of cash, jewellery and mobile phones. The robbers then blindfolded all passengers and raped the woman commuter on board, the SP said.

The passengers’ ordeal continued for over three hours till the seven criminals forced them to get off the bus and drove the heavy vehicle towards Raktipara’s Jam-e-Mosque, where they abandoned it and fled with the booty, police said.

Detectives are investigating the crime and all the robbers will be arrested soon, said the SP.

The woman is being treated at Tangail General Hospital, and her medical test is slated for Wednesday, according to the police official