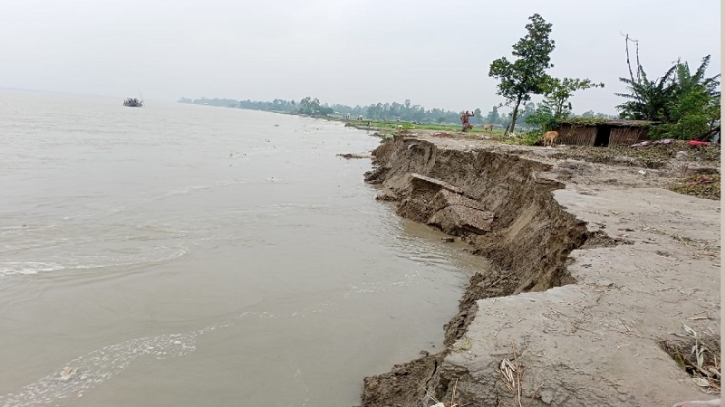 Erosion has taken a serious turn in Chilmari upazila of Kurigram district and Sundarganj upazila of Gaibandha district, rendering many people living along the banks of Teesta River homeless in the past one week.

Hundreds of houses have been washed away by the recent erosion while a vast track of crop lands and trees were devoured by the Teesta River.

Three educational institutions of the two upazilas are at risk of erosion.

During a recent visit to Patrakhata union in Chilmari upazila and Karent Bazar of Haripur union in Sundarganj upazila of Gaibandha district, this correspondent found that several hundred people have been living under the open sky as their homesteads were gorged into the river water.

Local people alleged that they lost everything due to the negligence on the part of the authorities concerned of the Water Development Board and contractor firm as they failed to dump GO bags along the bank of the river in time.

Maulana Abdul Aziz Akanda, Madrasha super of Patrakhata Riajul Jannah Dakhil Madrasha in Chilmari upazila, said erosion has taken a serious turn at the bordering areas of the two districts for the last several months but the authorities concerned did not take any steps to prevent it. As a result, many families were left homeless.

If the government would not take any effective initiative immediately, then the Mandalerhat Government Primary School, Madaripara Mondolerhat high School and Patrakhata Riajul Jannah Dakhil Madrasha will be washed away anytime, he said.

Bahar Uddin, a resident of the area said “The authorities concerned kept ready a hundred sacks of sand but why are they waiting? Have no idea. Had they dumped sacks in time then many houses could be saved.”

Abdullah Al Mamun, executive engineer of Kurigram Water Development Board, said 70,000 geobags have been allocated and they will soon start to dump the bags after counting.