’I have no complaints against anyone’ 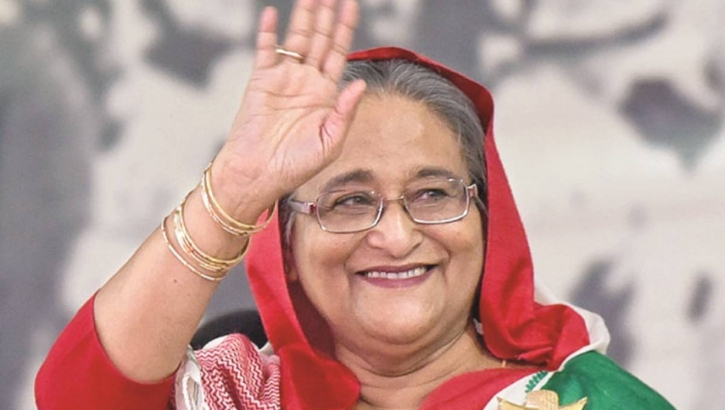 She thanks the officials, workers and other people involved in the process of constructing the mega structure.

Referring to her father, Bangabandhu Sheikh Mujibur Rahman, the Father of the Nation, she said, "We do not know how to bow our head."

"This is our emotion, our creativity, our pride."

PM expressed gratitude to people of both sides the river. "Salute to the people, they are sources of my inspiration."
She said there was delay in making the bridge, "but we never lost hope."
"I have no complaints against anyone, even those who opposed it. They will also get confidence now," the Prime Minister added.
The bridge has been built with top quality products and technology, engineers got knowledge, she said adding that  this bridge will contribute to the regional development also.
"Padma bridge is now a symbol of our capacity and dignity."
She said Bangladesh's economy will grow further with the implementation of other mega projects. She turned emotional and said she has the blessings of her parents. Then recollecting herself, she said, "Let’s take oath today to make Bangladesh a developed country."
BSS adds:

Prime Minister Sheikh Hasina today called the Padma Bridge as a "symbol of pride, honour and ability" of Bangladesh as the much-hyped bridge now stands on the mighty Padma river confronting all the conspiracies.

"Ignoring many obstacles and breaking the web of conspiracy, today the much-desired bridge stands on the chest of turbulent Padma River," she said in a gathering of dignitaries marking the grand opening of the Padma Bridge.

Mentioning that the bridge is not just a brick-cement-steel-iron made concrete infrastructure, the prime minister said, "This bridge is a symbol of our pride, our honour and ability."

"Today, I am happy, proud and overwhelmed along with millions of people of the country," she added.

The bridge belongs to the people of Bangladesh and it involves our passion, creativity, courage, endurance and perseverance of all, she said.

"Because, you (countrymen) are by my side, I have the courage to make this impossible possible. And my father, the Father of the Bangalee Nation, Bangabandhu Sheikh Mujibur Rahman and my mother Begum Fazilatun Nessa have given me courage and blessings from the heaven," she said

The prime minister said the construction of the bridge has been delayed due to the conspiracy, adding, "But we were not disheartened."
On this historic day of the inauguration of the Padma Bridge, she said,

"Red, blue, green and golden lights are shining in the chest of the Padma," she continued.

The country, which was liberated by my father, cannot be deprived anymore, she said.

The primer hoped that the people who opposed the construction of Padma Bridge would be more responsible.

"My family members, younger sister Sheikh Rehana and her son Radwan Mujib Siddiq, my son Sajib Wazed Joy and daughter Saima Wazed Putul, and some of my colleagues, including my Economic Adviser Dr Moshiur Rahman, former Communications Minister Syed Abul Hossain and Communications Secretary Mosharraf Hossain Bhuiyan, suffered extreme mental agonies because of the conspiracies orchestrated by certain quarters at the planning stage of the construction of this bridge," she said.